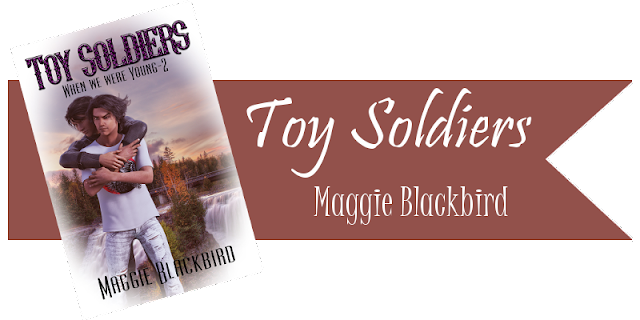 Series: When We Were Young
Volume: 2/?
Publisher: Devine Destinies

Billy's life has changed dramatically since he started living with his foster family, in the same house as the object of his love interest. The boy, who so far didn't have to worry about any rules imposed by his mother, now has to adapt to the numerous prohibitions and orders in his new home. However, the hardest thing for him is to accept the fact that his boyfriend, René, is not willing to openly admit that they are together. The matter is even more complicated as both boys are relentless, which leads to many arguments between them. As if that were not enough, René will finish school soon and will have to choose his further life path and Billy may not be a part of it.

"Toy Soldiers" by Maggie Blackbird is the second volume in "When We Were Young" series which is undoubtedly one of the best YA series I have read. Let's start with the fact that the characters struggle with believable, real problems that come with adolescence, as well as simply being themselves, and on the other hand trying to find themselves, their path. All this makes not only "Toy Soldiers", but the entire "When We Were Young" series one of the most ambitious I have read so far. And I'm not talking only about the LGBT + novels, but all YA stories I've read. And believe me, there have been a lot of them. What is equally important, "Toy Soldiers" is a book that not only the young people, but also the adults would enjoy, because the novel was written in such a way that it not only gives young people the opportunity to identify with the characters, but also fully engages older readers. It is a truly wonderful novel, full of advantages and profound content.


Reviewing "Toy Soldiers", I must also mention the way in which Maggie Blackbird creates her characters in this volume. I will not hide the fact that I am delighted with it. The author really understands the way young people think, their problems related to adolescence, and the transition from one period of life to the next. Most of the YA authors in their novels focus mainly on the problem of feelings, first love, discovering one's sexuality. However, in "Toy Soldiers" we see that these topics are closely related to many others that inextricably accompany young people, such as the topic of friendship, family relations, education and difficult choices that slowly lead to adulthood. And these are just some of the problems presented in "Toy Soldiers". As a teacher working with both the youngest children and the older ones as well, I am really impressed with how Maggie Blackbird has managed to show us feelings, emotions and live of teenagers.


However, "Toy Soldiers" is a novel that not only shows the problems, feelings and lives of young people, but also teaches them many important things. One of the lessons in this novel is the need to understand and accept yourself and other people's feelings. Young people relatively rarely see the world through the eyes of others, as they largely believe that the world should adapt to them, not the other way around. And this is what the author showed us in this novel. At the same time, Maggie Blackbird used the figure of a mentor, an adult who tries to show Billy, our young, self-absorbed man the right way. Thanks to the fact that the author builds this story in this way, the reader learns along with the characters, broadens their knowledge and awareness of the world, feelings, and the diversity of human emotions. As for adults, they have an insight into the psyche and reasoning of young people. And let's be honest, adults often don't remember the way they brains worked and their thoughts formed in their teens. As you can see, "Toy Soldiers" is a novel, the reading of which will serve both young and older readers.


Another very important topic in the novel that we all really need to learn is the acceptance of the other person's decision, fear and way of life. In "Toy Soldiers" we see this problem to a great extent in relation to many characters and situations. After all, even in the case of the main characters, both Billy and René have to learn the acceptance I've mentioned. The former, for example, in relation to the object of his romantic feelings, and the latter in relation to the person who, for various reasons, does not take the side of the weaker person and at the same time helps the tormentor. Of course there are many more examples, because the author has really tried to show this problem as fully as possible, and I think she did it really well.

In conclusion, "Toy Soldiers" is a really great and valuable novel, which I recommend wholeheartedly to every reader – teenage and this older one. In this book, the most important thing is not romance, but learning to function in the adult world, to understand and accept oneself and others, and to face various obstacles. It is also a novel about fighting for your feelings, inner strength and courage. In short, this is one of the best YA novels you can find. I recommend you "Toy Soldiers" with all my heart.

Headcanon: René gives Billy the 'Jealous Lover's Diary', a calendar in which Billy can take notes, but which is also full of advice how to fight jealousy.

Fanfiction idea: Billy tells René that since they can't be openly together, he wants René to, every two weeks, give him a written plan of a date on which he would like to go with Billy. René doesn't want to waste any time on it, so they argue, but they both reach an agreement.

AU idea: Science-fiction!AU, Billy is an Earthling, while René comes on Earth from outer space. Billy helps him hide from the authorities.


Here's some more about:

It is NOT a standalone book. Book 1 needs to be read first.
Add on Goodreads

Once a thief, always a thief, and if he can’t win the heart of the boy he loves, he’ll steal it.

Blurb
Billy Redsky’s made one of his biggest dreams come true, but there’s a problem. Even though the boy he loves is mere footsteps across the hall from his bedroom, they might as well live a country apart because claiming René Oshawee’s heart is more difficult than Billy anticipates.
Much to Billy’s disgust, René can’t accept his true self, so he’s incapable of loving someone else. And all he cares about is living a life the chief and his wife foresee for their youngest son.
If Billy is to finally have what he truly desires, he must stop René from running away from who he really is and face the man in the mirror, or what they share will never blossom into true love.

Stuart lived past the recreation center. Billy huffed down the road. Sure, he’d be interrupting dinnertime, but big deal. He couldn’t stay in Castle Oshawee any longer.

The boiling heat of anger beneath his clothing stopped him from freezing under the clear, cold sky. Darkness was fast approaching. The sun on the horizon was bursting with colors of mauve, scarlet, and pumpkin.

The big door at the recreation center opened. Billy’s old buddies, Lonn and Dylan, strolled outside to probably have a cigarette. When they strutted away from the doors and beelined for the road, Billy stiffened. They knew he could beat their asses—especially since he outweighed them by a good fifteen pounds now.

“Not much.” Billy stopped. He wasn’t going to keep walking like a coward afraid of the neighborhood bullies. “Heard you both got kicked out.” Because neither rode the school bus anymore.

“No biggie.” Lon shrugged. “Y’know we were bailing when we turned the big one-six.”

A direction Billy had been heading before dumb ol’ René had turned him into one of The General’s toy soldiers in Oshawee Army.

Splashes of rebellion bubbled under Billy’s skin. He might’ve blown off telling Mr. and Mrs. O where he was going tonight, but he’d been heading for Stuart’s, and later going home right on the button of his curfew time, like a good little grunt.

He folded his arms. “What’re you doing?”

“What else? Heading for the old house.” Lonn dropped another sly smile.

When Billy had used to party there, they’d burned stuff in the woodstove to keep warm during the winter.

“You coming, or are you still hanging with the geek twins?” Lonn elbowed a chuckling Dylan.

“Sure, why not?” Nobody at Castle Oshawee had given a flying fuck Billy had left the house. As for René, screw him. All he cared about was following the rules and obeying the orders coming from everyone seated in the living room.

An Ojibway from Northwestern Ontario, Maggie resides in the country with her husband and their fur babies, two beautiful Alaskan Malamutes. When she’s not writing, she can be found pulling weeds in the flower beds, mowing the huge lawn, walking the Mals deep in the bush, teeing up a ball at the golf course, fishing in the boat for walleye, or sitting on the deck at her sister’s house, making more wonderful memories with the people she loves most.

Enter the Rafflecopter Giveaway for a chance to win

Follow the tour and check out the other blog posts here

Email ThisBlogThis!Share to TwitterShare to FacebookShare to Pinterest
Tags: Maggie Blackbird, Toy Soldiers, When We Were Young