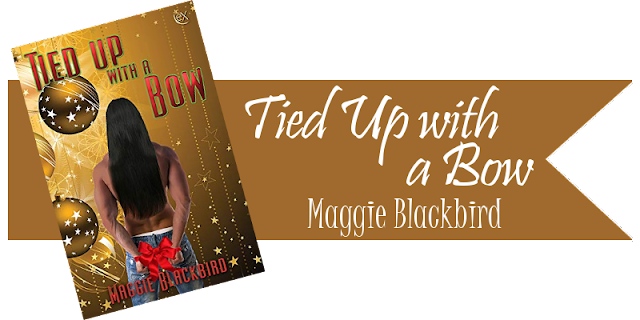 Years ago, Slade and Gavin were a loving couple, and the world was full of possibilities. Unfortunately, Gavin made a choice which tore their relationship apart, their happiness collapsed like a house of cards. Now the man wants to rebuild what he destroyed chasing glory and welfare. The problem is that despite all the years that passed Slade's heart is still bleeding and full of anger. While one of them wants to win over the man he still loves, the other plans his revenge. Which of these desires will come true during Christmas? Which of the men will get exactly what he wants like a gift under his Christmas tree?

"Tied Up With A Bow" is a little Christmas short story written by Maggie Blackbird, which main characters are two Ojibway men. In this kind of stories we usually see a sweet, carefree atmosphere, so to be honest, I was a bit surprised and at the same time delighted when it turned out that "Tied Up With A Bow" is definitely a more serious story than others of this kind. All this is due to the second chance motif, which the author presents as a kind of demanding and difficult challenge. I have no doubt that the main reason behind it is the fact that Slade holds onto anger and has no intention to forgive Gavin, who broke his heart all these years ago. It is also worth noting that while Gavin plans to fix what he has broken Slade really gives him a run for his money. Thus, in "Tied Up With A Bow" we find the right amount of drama that fuels our interest in this story, and makes it more serious and valuable than many others we may read during the holidays.


Another advantage of "Tied Up With A Bow" are undoubtedly the characters. I really like the fact that the author builds them from the perspective of both the present, and therefore she shows us who they are now, and the past, more specifically she tells us how they remember each other. Interestingly, their image based on the past contrasts significantly with the present one. In the case of Slade, it is worth noting that while he used to defend Gavin against his oppressors in the past, now the anger he feels makes him one of them. Gavin, on the other hand, wasn't the most beautiful teenager, but now he's like a walking perfection. I admit that I like this way of building the characters very much, because it perfectly emphasizes a topic of passage of time, and thus the problem of irretrievably lost years that changed both men. It impressed me a lot and I think it made the story deeper and more perfect.


In "Tied Up With A Bow" I also love the greatly presented motif of resisting the inevitable, which is somewhat one of the elements driving  Slade and Gavin's story forward. The author presents it in detail, emphasizing feelings and emotions. Well, it's not a secret that Slade's fighting windmills as he's trying to get revenge on his ex-boyfriend, while remaining indifferent to the feelings he still has. In fact, the man is deceiving himself, believing that he will be able to get revenge on Gavin and start a new life. Slade loses to the fate the moment he takes up the challenge he's offered by his ex, and starts to react to his advances. And it doesn't matter that in his opinion the main reason behind his behavior is revenge, because we can almost hear the laughter of destiny, which has completely different plans concerning Slade.

To sum up, "Tied Up With A Bow" is a really great, interesting short story we read with pleasure and delight. We find here an engaging story, lovable characters, hot sex scenes, second chance motif and inevitability of fate. This is undoubtedly one of the best Christmas stories I've read recently.

Headcanon: At first, when Slade and Gavin argue, Slade punishes his lover with some spanking. When he realizes that for Gavin it's more of a reward than a punishment, Slade decides to change his punishment and not have sex with him for two weeks.

Fanfiction idea: Slade decides to teach his lover one more lesson, and as his birthday is getting nearer, he has one condition concerning a present. Gavin must get Slade something special, but not sexual, that he can't buy with money.