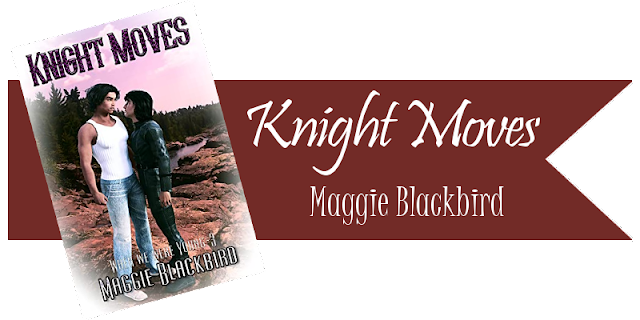 Billy and René's relationship may not be perfect, but it does seem to be stable. Unfortunately, everything turns upside down once again, when the boys are caught red handed and their love is blown into the open. The situation prompts René's parents to decide on his further education, and as a result, he and Billy are separated when the former goes to study in Toronto, and the latter completes his education at the current school.
Unfortunately, heart problems aren't Billy's only concern, as his mother comes back after her rehab and wants to rebuild her relationship with her son.

"Knight Moves" is the next volume of Maggie Blackbird's interesting, illuminating YA series "When We Were Young". This part, like the previous ones, teaches the readers, especially the young ones, who are almost adults, how to live with their problems and feelings. In this novel, we can clearly see how Billy and René are trying to face many difficult situations at the same time. What's more, we also have the opportunity to see how important in such times is an adult who will listen to them and help them find their way when they get lost. It is important, however, that the author doesn't put a "magic wand" in the characters' hands, which will solve all problems, cool down the raging emotions and feelings. Instead, Maggie Blackbird sets some signposts for her boys and they may or may not follow them, and thus she also teaches adult readers what their role should be in the lives of teenagers/young adults.
What I also like about "Knight Moves" is that the author continues to create her characters in a perfect way as they are still genuinely and believably young. Just as in normal life, our boys feel this well-known youthful frustration, especially when things go wrong and at certain points in their lives everyone seems to be turning their backs on them. The novel also touches the problem of understatements resulting from the lack of direct contact and the possibility of conversation, from listening to other people's accounts and, finally, from one's own interpretation, which does not always have to agree with the truth. Such situations not only give this story momentum and fill it with emotions, but also show us a real picture of the life of a young person for whom the world around them is only black or white. So in "Knight Moves", Billy and René are still real, believable, almost like they were taken out of our world and locked in the world of this novel. And this is beautiful.
Emotions also play a very important role in this part of the series. On the one hand, we see a whole lot of emotions that accompany young people on a daily basis, and on the other, there are also those that we all feel in certain situations, regardless of age. Thus, "Knight Moves" is full of feelings, emotions and psychological depth. That's why the moment we start reading this novel, we can't stop and we are totally enchanted by it. Each event, each twist is accompanied by strong emotions, which is addictive for the readers. Maggie Blackbird really gave us a novel that cannot be ignored. It does not matter if we are on the threshold of adulthood or we have this stage of growing up behind us, when we reach for "When We Were Young" we fall in love with this series, and our feelings deepen with each subsequent volume, to reach the climax in "Knight Moves". Believe me, if I had had the opportunity to read this series as a teenager, I would  have been as in love with it as I am now. "Knight Moves" is perfection.
Finally, I would like to mention one more thing that touched and delighted me in this novel. It's about the Standing People. I admit that I have never come across this term referring to trees, which probably will not surprise anyone considering my origin. Nevertheless, I was reading Billy and Ned's conversation about the Standing People with my mouth agape. It didn't occur to me to look at the trees in the way that is depicted in the novel. I have always approached them as a different organism, a different creature that is closer to animals than to humans. However, Maggie Blackbird opened my mind and showed me the world that I knew from a completely different angle. I am delighted with this and have a lot to think about. It is worth mentioning that the author in her novels allows us to discover wisdom that cannot be found in contemporary and technological cultures. I consider what she wrote about Standing People to be a priceless gift and I am very grateful to her for that.
To sum up, "Knight Moves" is a great continuation of the previous volumes in the series, and a great story in itself. It is undoubtedly a very wise, interesting and emotional novel that grabs our hearts. Believe me, if you don't read it, you'll regret it. This is really the best YA novel I have read.

Headcanon: Billy and René write letters to each other every day, but they do not send them. They just hide them in a box, planning to keep it a secret.

Fanfiction idea: Years later, Billy finds a hidden box with René's letters, while the day before, René found Billy's box of letters. They read them in secret and no one wants to admit their discovery.

Email ThisBlogThis!Share to TwitterShare to FacebookShare to Pinterest
Tags: ARC, Knight Moves, Maggie Blackbird, Review, When We Were Young, YA, YA LGBT+