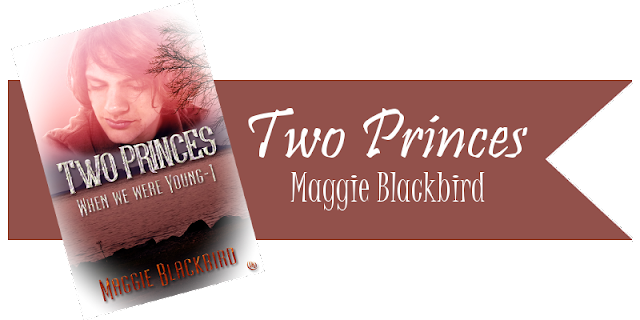 Series: When We Were Young
Volume: 1/3
Publisher: Devine Destinies

Billy Redsky is an artistically talented boy who comes from a pathological family, which affects his everyday life, behavior and choices. He just wants to be noticed at school, impress people he admires in some respects, in particular this one boy – René Oshawee, the son of the Ojibway community's chef. One day, Billy and René's heated argument ends with after-school detention and that's when everything in their life slowly begins to change. Although Billy and René are so different from each other, they quickly become friends and Billy is willing to pay any price to be with René. The better the boys get to know each other, the deeper their feelings are. But is Billy's courage and his persistence in pursuing his goal enough to help René finally open up and accept his feelings?

"Two Princes" is part in "When We Were Young" series by Maggie Blackbird, which I already consider truly fantastic, extremely valuable and worth recommending. It is a young adult novel, intended largely for teenage readers, as the main characters are about 15-16 years old. Therefore, I believe we should take a look at the way they are shown in this story. I admit, I am very impressed with how well the author managed to capture the mentality, way of thinking and acting as well as some of the problems of young people. Billy and René are presented in a believable way which makes them real. This is very important, because thanks to this fact, the reader, especially the young one, when reading this novel feels a deep connection with the characters who, to some extent, are just like them, so they feel that they are not alone and can truly identify with Billy and René.


The broadly understood courage is one of the very important topics raised and developed in the novel. In "Two Princes" we see the courage to face your fears, say "no", do the right thing, fight for your dreams, change, allow yourself to get help, accept yourself. I must admit that the author positively surprised me. In her novel, Maggie Blackbird created two really strong young characters who, in sometimes really difficult situations, are able to make very difficult but right decisions. They do not wait for a miracle, they do not wait for the fate to provide them with a solution to their problems. They take action, find the strength to fight, act, change something. Thus, they are the characters who are role models for the readers, and the whole novel carries a very important message: you are young, but you don't have to be a victim; it's up to you to take the first step if you want to change something; love yourself and let others love you; you are an important, valuable person.


As "Two Princes" is a novel intended for teenage readers, I am really glad that it focuses on a topic which is very important to young people: the friendship. Maggie Blackbird in a truly wonderful and detailed way shows the importance of friendship, the ups and downs of seeking and finding it, and the need for acceptance. In my opinion, it is extremely important that the boys Billy is friends with at the beginning are not the real friends he needs. What's more, he finds the real friends in people he didn't like as he didn't really know them. As for René, we see his somewhat complicated relationship with his team members, so people he wants to consider as friends, although in reality it's not that simple. In this way, the author shows her readers what true friendship really is, how valuable it is for a person, how much it can change their life, and at the same time encourages them to bravely look for it.


Another topic that dominates the life of almost every young person and which is also a very important element of this novel's plot are romantic feelings, first love. Also in this respect, Maggie Blackbird builds her novel very realistically and believably. The fact that not only her characters but also their feelings are shown in "Two Princes" in a believable and convincing way is another of the countless advantages of this novel. Moreover, the author links the theme of feelings with the acceptance of oneself and one's sexual orientation. In this case, it seems very important to me that while one of the characters is bisexual, the other is gay. This gives the author a chance to emphasize the problem of self-acceptance and youthful love even more thoroughly and deeply. The author shows how difficult it is for René to accept his orientation and attraction to Billy, as well as reveals how in this context the boy perceives the bisexuality of his friend/object of his romantic interest.

All things considered, "Two Princes" is a great and valuable novel that I highly recommend to both teenage readers, who are the age of the main characters, and adults. In this book we find not only an interesting, instructive story full of hope, but also reliable, brave and really strong characters who show us why it is worth going against the tide sometimes. This is undeniably one of the best young adult novels I have read.

Fanfiction idea: René and Billy spend one week of their summer vacation camping in the woods. Billy, who loves horror movies, is a bit scared, although he doesn't want to admit it.

AU idea: Billy is a famous artist who is followed by a stalker. The lunatic becomes jealous when he sees Billy with his girl friend and attacks him. In the hospital, doctor René Oshawee is taking care of Billy.


Here's some more about:

It is the book in the When We Were Young series.

To win over the chief’s haughty son, a drug-dealing punk from a dysfunctional family must risk the only two things he has: his reputation and freedom.

Billy Redsky, a rebellious punk who loves art and nature, is saddled with a welfare-leeching, alcoholic mother and criminal older brother who are the joke of their Ojibway community. Sick and tired of being perceived as a loser, Billy deals drugs for his older brother to earn quick money. He hopes if he buys a dirt bike, he’ll finally impress the chief’s popular and aloof son, René Oshawee.

When the two are forced to serve detention together, a friendship blooms, but much to Billy’s frustration, René keeps putting him on ice. To make his biggest dream come true if he finally wants to call René his own, Billy must make a huge decision that could cost him everything.

At the same time, they entered the office doorway. Billy’s side received a sharp elbow jab, and his lungs almost hurled from his throat. Pain. Major pain.
René pointed at the chair. “Sit. I’m going first. Unlike you, I don’t got all day to be playing around.” He strode to the counter. “Is Mr. Carlson in? Mrs. Lamb sent me.” The attitude in his voice melted into an ass-kissing, respectful tone.
“What for?” The secretary, with a big beehive straight out of the sixties, stood.
René pointed his thumb over his shoulder. “Redsky got into my little cousin’s face. I have to talk to Mr. Carlson about it.”
“Okay. Let me buzz you in.” The swinging-sixties secretary reached for the phone.
Never mind his aching side. Billy scrambled from the chair. “I ain’t taking the rap for this. You started it, loser.”
René whipped around. “What’d you call me?”
“I called you a loser.” Billy fisted his hands.
“You worthless punk.” René held up his finger in a lecturing gesture just as the teachers did. “Wanna talk about losers? Your mom and brother are total alkies and welfare leeches. It’s people like your family who give reds a bad name. That’s why everyone hates on us and says we’re a bunch of drunks sucking the taxpayers dry.”
“Is that what Chief Oshawee says when you’re having your fancy steak supper? Or maybe your mom says it ‘cause she’s some bigshot accountant?” The jeer flew from Billy’s mouth.
“Give it a rest, boys.” Mr. Carlson’s thick voice whirled into their argument. “My secretary told me you both were sent here. René,” he pointed at the door, “into my office. And, Billy, sit down. We’ll talk once I hear René’s version.”
It figured Prince Oshawee would get to go first. At least Billy had been smart enough to pass off his stash to Lonn before being sent to the vice principal’s office.
For ten minutes, Billy waited, and waited, and waited, the second bell having already rung. René was probably painting a sham picture of Billy shoving dope down Stuart’s throat.
The door to the vice principal’s office opened. René huffed out. He shook back his shoulder-length, thick, almost-black hair and trounced from the reception area into the main hall.
Instead of raw fury searing Billy, being ignored by the royal spare was sharp teeth sinking into his skin. Big deal. He didn’t give a shit about anyone or their opinion. Especially an Oshawee.
“Billy...” Mr. Carlson and his big gut filled the doorway. “In here. Now.”
Billy slunk into the office and flopped in the usual stiffer-than-a-board chair opposite the massive oak desk. He dropped his backpack and his frustration onto the floor. There was no point in arguing. Chrome Dome would believe an Oshawee over a Redsky.
Mr. Carlson sat on his king-style throne. “Fighting again?”
What could Billy say? Nothing.
“I didn’t think so.” Mr. Carlson picked up the phone and flipped through his Rolodex. “I have business to attend to. You’ll report to room two-o-two after school. We have a new strategy when it comes to physical disputes. You’ll find out then when you get there. Dismissed.”

An Ojibway from Northwestern Ontario, Maggie resides in the country with her husband and their fur babies, two beautiful Alaskan Malamutes. When she’s not writing, she can be found pulling weeds in the flower beds, mowing the huge lawn, walking the Mals deep in the bush, teeing up a ball at the golf course, fishing in the boat for walleye, or sitting on the deck at her sister’s house, making more wonderful memories with the people she loves most.

Enter the Rafflecopter Giveaway for a chance to win

Follow the tour and check out the other blog posts here